The Power & Whimsy of KAWS 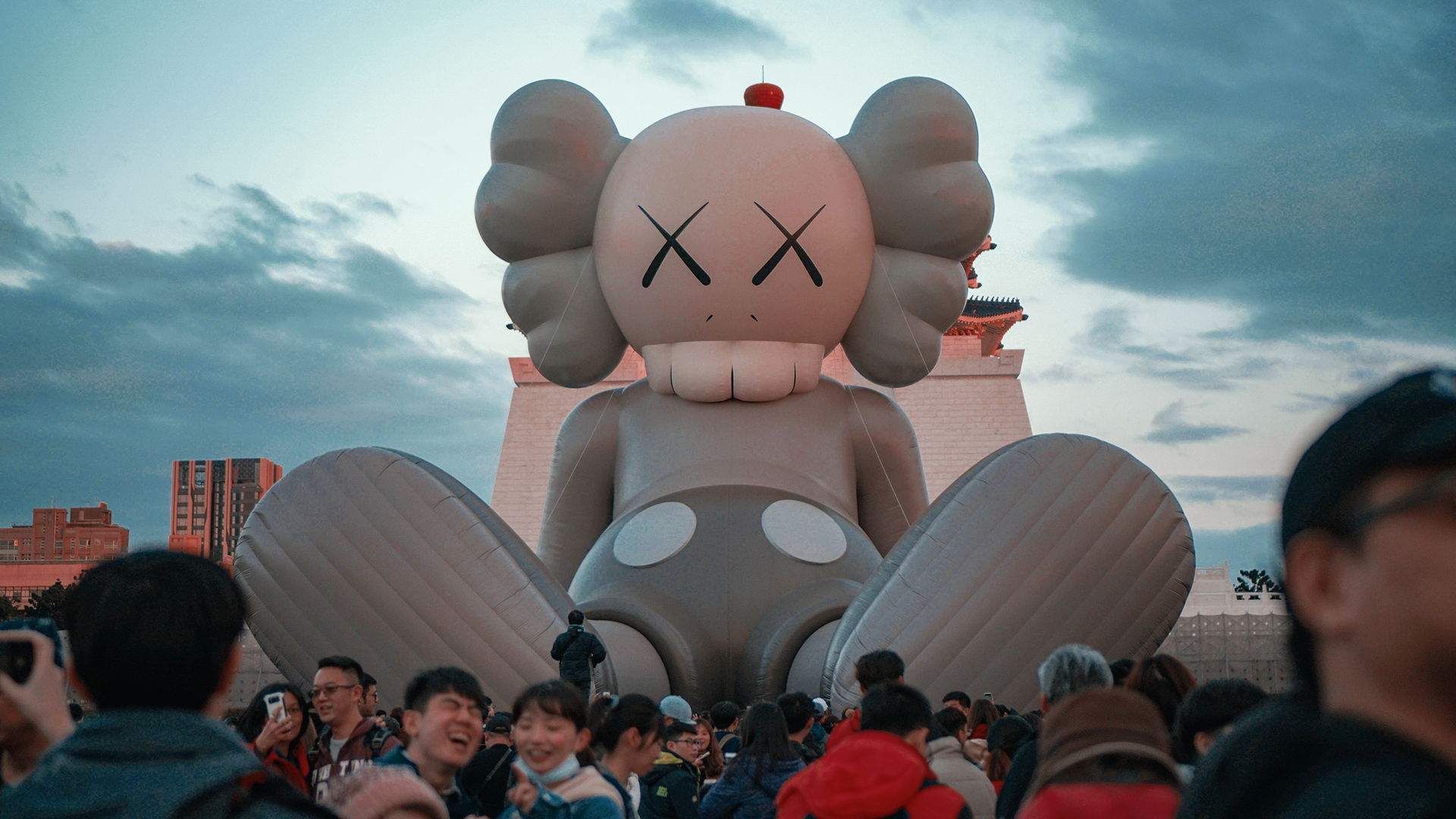 Brian Donnelly (aka KAWS) has ascended to the highest realms of living artists. His work is everywhere, from galleries to shopping malls. His reach extends around the world — Paris, London, Berlin, Tokyo and New York City.

How does one man gain such crossover appeal?

It all comes down to his refusal to allow labels to define his work. In his own words: “It’s just the same way the people try and compartmentalize you with like, oh you know the people that know me from like graffiti, oh, you’re a graffiti artist, or you’re a toy designer or people when their first interaction with me is at a museum and they’re like oh, contemporary artist…and I always felt like those labels are unnecessary.”

KAWS’ ability to leap over definitions and strike out in new fields keeps his work fresh and his name in the headlines. And if we look at his history, we see that there is probably no artist as astute at navigating these strange waters as KAWS.

Donnelly was born on November 4, 1974. By the time he was an adolescent, street art was taking off. The young artist built his name in this milieu, making illegal graffiti in his hometown of Jersey City, New Jersey under the tag KAWS, chosen because he liked the way the letters looked together. This work often subverted commercial images and billboards.

But he had dreams of becoming an animator, and he attended the School of Visual Arts in New York City to receive an illustration degree. He worked at Jumbo Pictures as an animator, working on several cartoon television shows.

Throughout the mid-90s, KAWS continued to lead this double life. It would prove to be a formative experience, shaping his iconic style that would eventually take the world by storm.

His fine art and commercial work often focuses on the same set of characters, most famously Companion — a Mickey Mouse inspired figure with a skull and bones head design and Xs for eyes. Other popular KAWS characters include Bendy — a sperm-like version of Companion — and Accomplice — a bunny-eared spin-off of Companion.

These characters have appeared as sculptures, limited edition toys, a version of the Moonman trophy for the 2013 MTV Video Music Awards and in countless other forms. Companion is so popular that when the Museum of Modern Art sold action figures of the character online, their website crashed.

The use of the same characters connects back to his love of children’s animation, and his own work can be read in a similar way. Companion is a motif that allows the artist to explore new ideas through the same general outlook. It grounds his exploration, centering it around the adventures of a single character.

This approach also allows him to expand into commercial forms that many other fine artists would shy away from. Action figures and key chains are natural extensions of KAWS’ cartoon characters, because they are popular, accessible means of owning his art.

Rather than breaking with the mystique of the fine art world, KAWS is actually staying true to the cartoon origins of his inspiration.

Although his work does bring up interesting questions about commercialization and consumerism — and their unsavory manipulation of children’s media — these are only happy accidents for the artist. In interviews, KAWS remains fairly aloof about the “meaning” of his work, making it clear that he is not making a point, only making art. Whether large or small, his characters evoke responses of wonder and his art fans are global, loyal and truly affectionate.

KAWS in the Mall: Uniqlo, Nike Air Force 1 and More

One of the most provocative parts of KAWS’ career is his ongoing collaborations in the fashion world.

His most popular is the work he does with the clothing manufacturer and retailer Uniqlo, which began in 2016. Rather than making limited edition pieces that would score big money from serious collectors, KAWS and Uniqlo have made several lines of t-shirts and soft toys that are meant to be affordable for everyone. In the designs, he riffs on the likes of Sesame Street and Peanuts.

Another highly notable crossover came in 2008 when he designed a pair of Nike Air Force 1 trainers as part of the Nike 1World project…sneakerheads pay upwards of 10K for a rare pair.

While many in the art world thought such collaborations would undermine his name equity, these projects have only elevated him. Like his limited edition toys, these give fans of the artist new ways to engage with his work. They expand the idea of what an artistic concept can be and where it can go.

The anxiety many art lovers have around KAWS is a concern about the boundaries between the art world (which they see as pristine and free of low commercial interests) and pop culture (which they see as vulgar). But this all falls apart when a KAWS statue sells for an enormous sum at an auspicious art auction — his allure transcends classification.

It is easy to break up all of the work KAWS puts out into little categories — and in fact, many in the art world would love to do just that. His collector’s items are over in this corner, his fashion is over in that corner and his fine art is right here.

But as an artist, KAWS doesn’t roll that way.

We have to see all of his art as one great body of work. It’s a sense of playful subversion that began with his graffiti. It’s using the medium of cartoon characters that he connected to as an animator. And it’s the visionary, ingenious and very human thought process behind it all that makes it fine art.

Are you interested in the artwork of KAWS but don’t know where to begin collecting it? We can help you find what you’re looking for! Henry on Pop Art is an art advisory service that makes it easy to find and purchase Contemporary Blue Chip and Pop Art.

Own a piece of modern history — Learn How