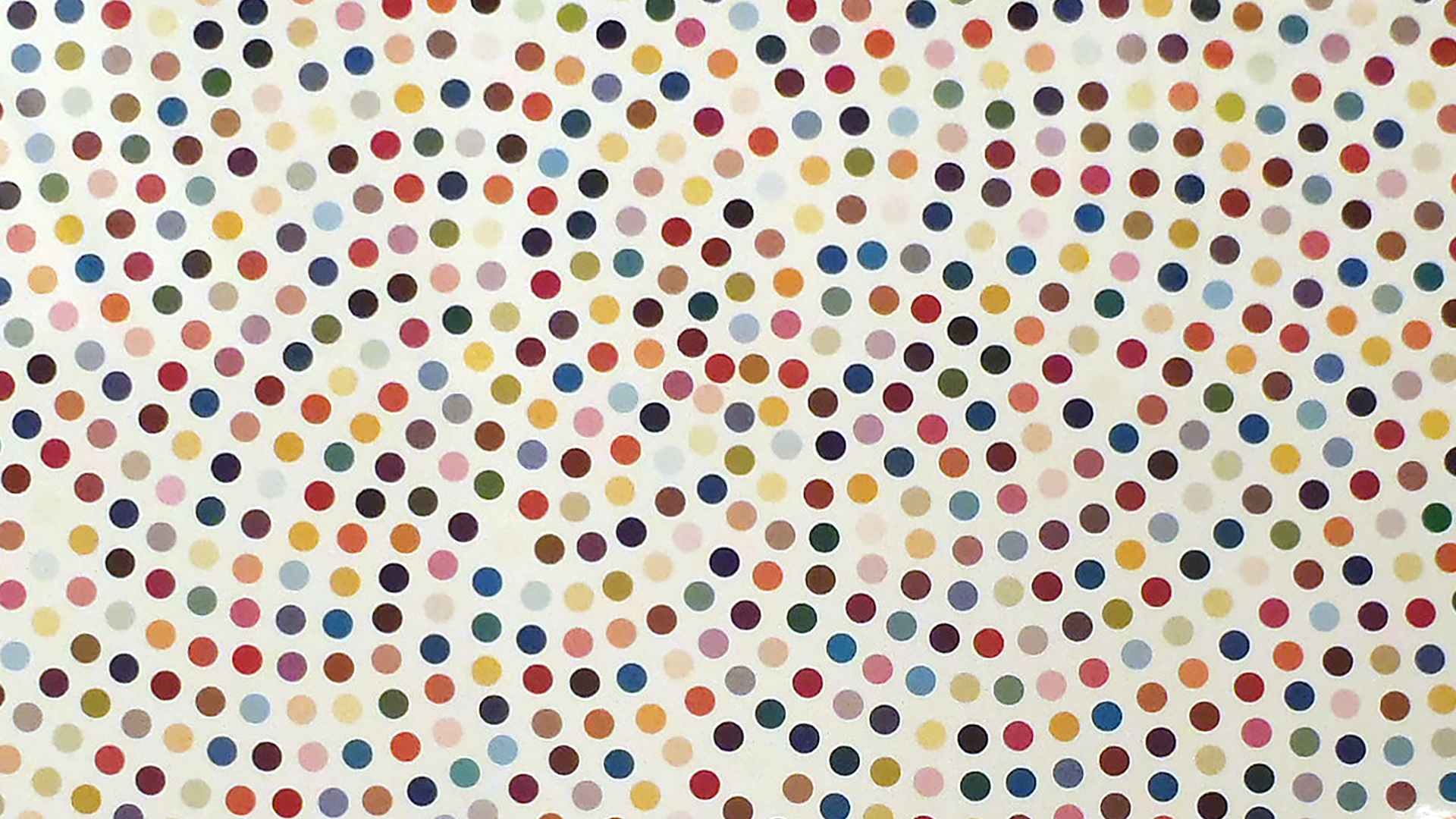 “Great art — or good art — is when you look at it, experience it and it stays in your mind. I don’t think conceptual art and traditional art are all that different.” — Damien Hirst

If you needed one word to describe artist Damien Hirst, you couldn’t do much better than controversial. As a creator working at the top levels of our culture, he has come to define a certain punk ethos and extravagant daring that place him in a category unto himself.

Much of his work focuses on death, a theme that continues to propel him. He goes beyond contemplating nothingness and instead observes the feelings it stirs inside of us — consider the name of one of his most widely acclaimed works, “The Physical Impossibility of Death in the Mind of Someone Living” (1991), in which an immense, dead tiger shark is preserved in formaldehyde and displayed in an clear case for all to see.

He is also known for wrapping images of death in splendor, as in “For the Love of God” (2007), a platinum sculpture of a human skull is bedecked in 8,601 flawless diamonds.

He also examines color for its own sake. His spot paintings are grid-like works made up of dots of random color, and his spin paintings create random color patterns by making use of a rotating base for his substrate.

These diverse interests show the dimensions of the artist: both abstract and all-too embodied. This dichotomy that runs through his career provides Hirst and his fans with a dynamism rarely seen in the contemporary art scene.

His memorable exhibitions and ability to ignite passionate responses (both for and against) have paid off well. Hirst’s net worth is estimated to be $384 million, making him the richest living artist in the United Kingdom. His one-artist auction at Sotheby’s in 2008 made $198 million alone, the highest of its kind.

Early Life + The Allure of Death

Damien Hirst was born in Bristol, England in 1965, and grew up in Leeds in a working class family. As a child, he struggled in many school subjects, except for art. A born enfant terrible, he had a rebellious streak, and became enamored with the punk movement as a teenager —causing a challenging relationship with his single mother.

In 1983, he had a formative experience at the Hayward Gallery where Franic Davison’s abstract collages were being shown. This started him down a path of experimenting with color and shape, something that would become a staple of his output.

After school, Hirst moved to London and spent a couple of years working in construction. But he went to Goldsmiths College in 1986, where he earned a BA in Fine Art. During this time, he spent hours in a mortuary, which planted a seed his artistic career would grow into a passion and muse.

While still enrolled at Goldsmiths, Hirst began “Medicine Cabinets,” a series that would go on to become one of his most treasured. For the first, he filled a cabinet that he built using medicine packaging from his late grandmother. The work is then not only an examination of the wide variety of chemical manipulations society makes available to the human body, but also a deeply personal piece.

At first, he arranged the medicines according to the areas of the body they were meant to treat, making the cabinet a kind of diagram of the human form. But Hirst quickly abandoned this organizing principle, opting to rely on the colors of the packaging alone. This method mimics that of his spot paintings, which are often given pharmaceutical titles.

In these pieces, a narrative begins to emerge: the frailty of human life and our ever present proximity to death.

In 1992, Hirst expanded on the idea with “Pharmacy” — a site-specific, room-sized installation depicting a pharmacy in striking detail. Made for and first shown at Cohen Gallery in New York, the work made a major impact and was an early success for Hirst.

Of Hirst’s most lasting works, his spot paintings might be the most well known. Cleanly organized spots of differing colors make up these pieces, which he began while at Goldsmiths.

They burst into public consciousness during “Freeze,” an art exhibition Hirst organized in an old London Port Authority building — the legendary show emerged as the inciting incident for a new generation of creatives called the Young British Artists (YBAs).

Hirst makes art, but he is also a ravenous collector of it.. He owns works by such diverse luminaries as Francis Bacon (who was a fan of Hirst), Richard Prince, Banksy, Andy Warhol, Jeff Koons and many more.

His passion for collecting art is featured in curated shows at his Newport Street Gallery in London, exhibiting work entirely from his impressive, personal art collection.

One does not become the bad boy of art without making enemies. Some art critics have gone so far as to say that what Hirst makes isn’t art and that he is not an artist. Others are less severe, though perhaps more dire, calling his work a signal of the death of society.

David Hockney famously criticized Hirst for using assistants in his work during an interview with Andrew Marr, saying, “It’s a little insulting to craftsmen, skillful craftsmen… I used to point out at art school, you can teach the craft, it’s the poetry you can’t teach. But now they try to teach the poetry and not the craft.” Hockney later denied that the critique was directed at Hirst. Interestingly, they had competing solo exhibitions in London at that time.

But this kind of hyperbole is the exact point of Hirst, who thrives on the controversy his work generates. It is the grandiosity and rebellious nature of the artist that clearly energizes him.

Do punks fear growing old? The artist was once quoted as saying, “Museums are for dead artists. I’d never show my work in the Tate. You’d never get me in that place.” In 2012, the Tate Modern opened a major retrospective of his work which became the most popular show in the gallery’s history. So very Hirst.

Hirst is always exploring new technology and continuing his work in new mediums, so naturally he is engaging with NFTs. Damien Hirst created a unique NFT initiative called “The Currency” in which 10K IRL hand-painted dot artworks, each corresponding to an NFT would be sold for $2K. The buyer would have a year to choose between either keeping the art or the NFT…the other of the pair would be destroyed. The project has already generated $25M.

Despite his acceptance into the highest reaches of the art world, he remains the Hirst we fell in love with: radical, perverse, death-obsessed, creative and very much alive.

“I think as an artist you have to reinvent yourself every day.” — Damien Hirst

Are you interested in the artwork of Damien Hirst but don’t know where to begin collecting it? We can help you find what you’re looking for! Henry on Pop Art is an art advisory service that makes it easy to find and purchase Contemporary Blue Chip and Pop Art. Own a piece of modern history — Learn How