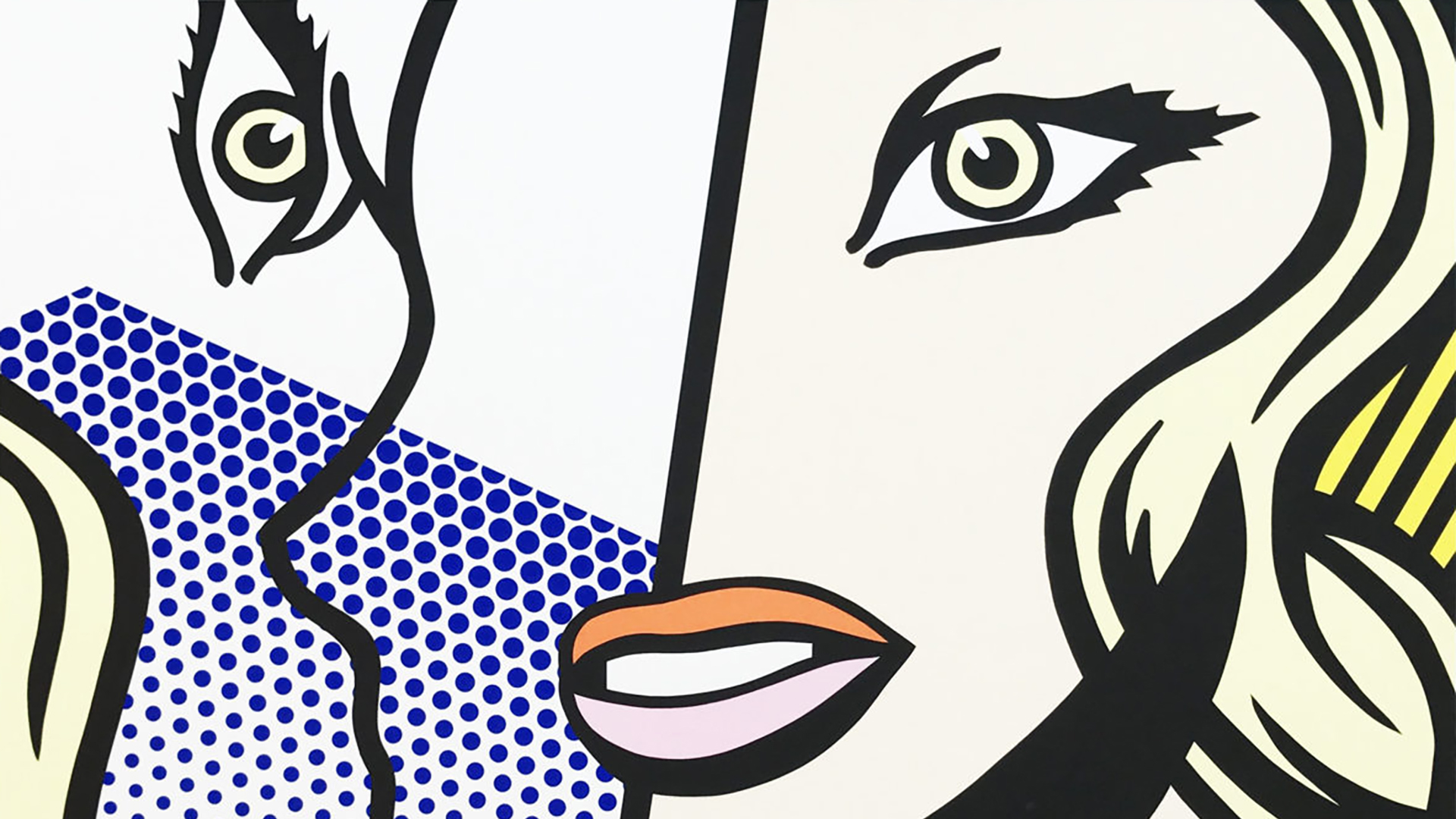 “My work isn’t about form. It’s about seeing. I’m excited about seeing things, and I’m interested in the way I think other people see things.”
— Roy Lichtenstein

Ultimately, we look to art to see inside of ourselves and our world. Great artists have always made this possible. They translate reality back to us, giving us a clearer view. We come away understanding the mystery of existence a little more. Roy Lichtenstein did this through his exploration of color, lines, shapes and the visual language of 20th-century American pop culture.

Lichtenstein was not only an undisputed master of pop art, he helped form it. His breakthrough vision of art as a mirror for the “low brow” visual landscape of 60’s America catalyzed a massive change in the art scene, reforming and rejuvenating it in the process. His unmistakable style and impact are still powerful forces in the art world today.

But who was Lichtenstein? And what do those Ben-Day dots and blown-up comic book frames continue to say decades later?

Lichtenstein was born in 1923 to a wealthy middle-class family living in the Upper West Side. He attended the prestigious Dwight School, where he developed a love for art and jazz music.

He later attended Ohio State University, interrupted by a three-year stint in the Army serving in World War II, and eventually studied under Hoyt L. Sherman who made a profound contribution to the young artist’s development.

He had his first solo exhibition in 1951, and through the next few years continued to experiment in many different styles of painting while securing work in design. That marriage between fine art and commercial printing processes would begin to form a unique idea that would come to be Lichtenstein’s calling card.

In 1960, while teaching at Rutgers University, Lichtenstein began to merge techniques, and in 1961 he created his first paintings in the pop style by blowing up frames from comic strips and recreating them with expressive alterations. The results were a success, and his first solo exhibition of this work was all purchased by collectors before it could even open.

“I’m never drawing the object itself; I’m only drawing a depiction of the object — a kind of crystallized symbol of it.”— Roy Lichtenstein

By focusing on comic strip panels, taking them out of context and enlarging them, Lichtenstein found a rich well of inspiration to draw from. The form helped keep the parody light and charming while still containing powerful messages about the world we live in.

By 1963, he’d become a worldwide phenomenon. Works like Drowning Girl (1963) gained international fame. Painted using oil and synthetic polymer paints, Lichtenstein based the work on a Tony Abruzzo comic splash page design of a woman drowning, her face resigned as she thinks, “I don’t care! I’d rather sink — than call Brad for help!” The melodrama and sophisticated adjustments made to the source material created a powerful mixture, one that would continue to bear fruit through the artist’s career.

While he attained a high profile, he was also met with brutal criticism. Perhaps because of this, the artist rarely spoke of his work in pretentious tones. He never claimed that his work contained profound insight into the human condition. Half a century later, we can clearly see that, whatever its detractors might say, the work stands as a tremendous contribution.

He developed several powerful series, including Brushtrokes. Kicked off by his 1965 painting of the same name, Lichtenstein kept returning to the visual of thick stripes of dripping paint. He even carried the motif into his sculptures and murals.

Another popular part of his oeuvre are his reproductions. His Bedroom at Arles (1992) gives a fun and brightly colored update to the popular Van Gogh painting. His stylistic overhaul put his visual language in direct conversation with Van Gogh, and as art lovers, we sit at the feet of these masters happy to listen in.

He is also well known for his commissions, which include many public sculptures and murals. Mural with Blue Brushstroke (1984-85) is one such example, standing a staggering five stories tall in the atrium of the Equitable Tower.

Along with the likes of Andy Warhol, Lichtenstein’s work went on to inspire a generation of pop artists. By his death in 1997, he’d painted over 5000 works, created sculptures and even film. His trademark style has gone on to be parodied in media, which no doubt would draw approval from the artist himself.

A Lichtenstein painting is often first noted for his use of Ben-Day dots, a method in commercial printing that inexpensively prints colors. Miniscule dots are printed in primary colors. By spacing them, tints can be achieved, and by putting colors side by side, secondary colors can be created. The process was used in comic books extensively as it reduced costs.

Because Lichtenstein projected comic strips into larger formats before making alterations and transformations, the Ben-Day dots were easily seen. Rather than obscuring them, Lichtenstein leaned into this feature, eventually adopting them in his sculpture.

With a playful freedom and a deep confidence in his sense of style, Lichtenstein stands as an example of art fully liberated. Able to enjoy itself for no reason beyond the pleasure of creation, his work ends up mirroring our society and the visual maelstrom that is our culture.