Text as Art – A Brief History 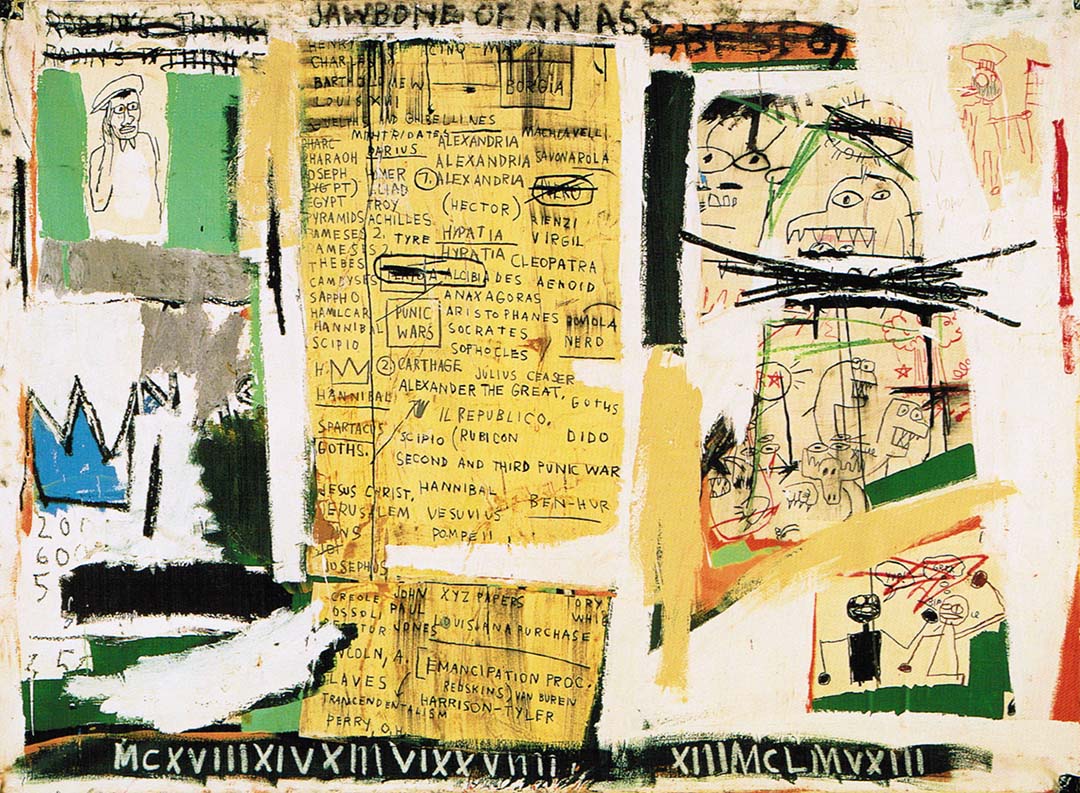 Jean-Michel Basquiat – Jawbone of an Ass

Art is a timeless, international language. Great art is indelible. A brilliant artist can express the totality of an emotion or concept in one breathtaking moment. And the viewer evolves along with the artwork. An image may be taken initially in a certain way, but oftentimes, powerful artwork lingers in the heart and mind of the viewer throughout time and continues to reveal even deeper meaning and emotional impact.

Artists work in all different mediums, from paint to metals, charcoal, stone, film…literally anything they can best use to express their ideas. Some artists choose to use words and text in their art…some for their visual shape and power, some to convey direct messages, some to provoke, to shock and some to keep the art lover guessing.

Text has always been a powerful device. Artists who choose to utilize text to create a statement and evoke emotion understand their multi-level power. Letters, words, numbers are used in unique, evocative ways to command the attention and imagination of the viewer. Done effectively, they never lose their allure.

From ancient murals and pottery to medieval illuminated manuscripts with their intricate illustrations, text has appeared in art for centuries. But in the 20th century, when Surrealist artist René Magritte famously wrote “Ceci n’est pas une pipe” (“This is not a pipe.”) on his painting, he used text as a central element to understanding the work. Cubists, like Georges Braque, used to incorporate text into their artwork, with newspaper clippings and various printed materials to add another level of meaning to their paintings.

Abstract Expressionism, Pop Art and Minimalism gained momentum towards the end of the 20th century and text continued to play an increasingly vital role in the artistic expression associated with these movements.

The extraordinary painter Cy Twombly used abstract gestures and words, inspired by the ancient history surrounding him in Rome.

In his iconic painting “Whaam!,” American painter Roy Lichtenstein incorporated comic style onomatopoeia into his vibrant art style to create a work that was both visually arresting and emotionally provocative.

Both legendary artists, Jean-Michel Basquiat and Andy Warhol used words, pop cultural references and text, each in their own unique style, especially when they briefly collaborated together. Artist Ed Ruscha had studied lettering, advertising and design and captured California cool with his word paintings in which he expressed his love for “…the tension of words and images.” In 2019, Ruscha’s vivid work “Hurting the Word Radio #2” sold at Christie’s for a record $52M. Ever working with words, American artist Robert Indiana’s sculpture “Love” with its famous four-letter word has become a global icon.

Text-based art continued to evolve and gain appreciation. In 1987, American artist Barbara Kruger created a now iconic screenprint that reads “I Shop Therefore I Am”—a play on French philosopher René Descartes’ famous saying “Cogito ergo sum” or “I think therefore I am.” The work is a sharp critique of consumerism that still resonates today.

New York City experienced a golden age of graffiti. The form flourished over the next two decades. Some of the greatest artists of the 20th century got their start outdoing each other on the canvas of the city — Text and images sprayed over subway cars, buildings and billboards.

Basquiat, Banksy, Shepard Fairey, Keith Haring, KAWS, Mr. Brainwash — these major names in the art world all began on the streets. The rebellious legacy of this art form reshaped the cultural landscape, with work garnering millions at auction and the style influencing generations of painters, graphic designers and just about anyone working in the visual arts.

Raw, evocative and wild, artists were able to express themselves freely… the sheer power of the art form transmuted and caught the attention of serious art collectors all over the world.

Text-based art is not only visually appealing but also intellectually stimulating. These works require viewers to slow down and really think about the message the artist is trying to communicate. The next time you’re at an art gallery or museum, take some time to look for examples of text-based art—you might be surprised by how many you find!

At HOPA, Henry can inform, advise and introduce new and experienced art collectors to some of the most exciting works from these legendary artists, who catapulted from the streets to some of the greatest art collections in the world.