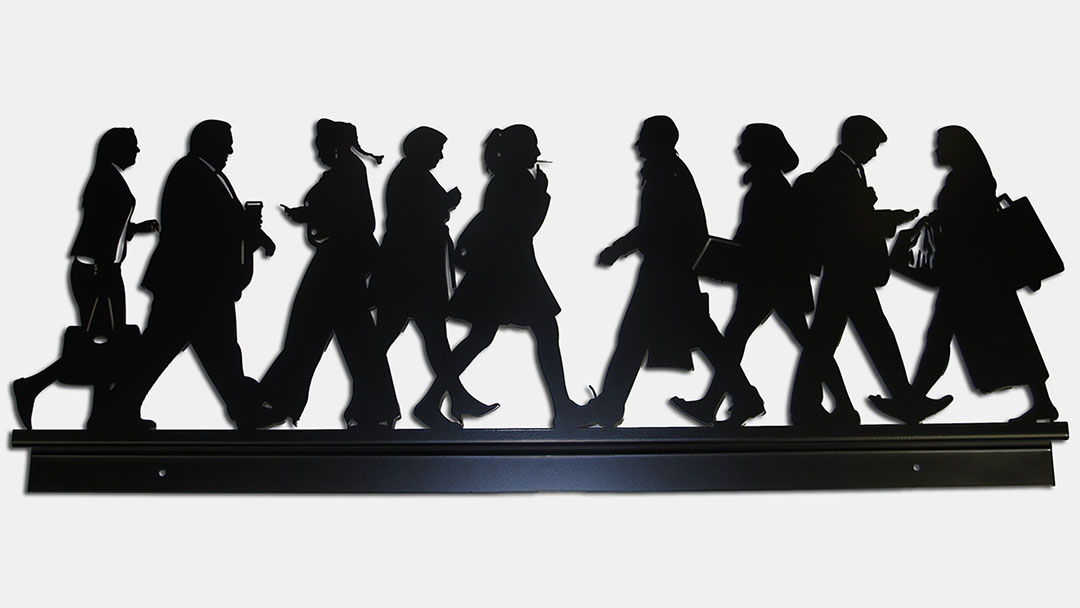 Julian Opie is an amazing British pop artist who’s been making waves in the art world for decades. His technique and style are unique, characterized by simplicity and pop culture references. Opie’s work combines elements of traditional portraiture and landscape painting with modern digital techniques, resulting in an instantly recognizable style that has won him international acclaim.

Julian Opie was born in 1958 in London and raised in Oxford, England. Opie’s early life was influenced by his parents’ passion for art. His father was an economist, his mother was a schoolteacher and they both nurtured Opie’s own interest in art as he began to experiment with various mediums at a young age.

After studying at Goldsmiths College of Art from 1976 to 1980, Opie began to really establish himself as an artist. He exhibited his work in London and around the world, and his popularity quickly grew. His unique technique and style caught the attention of art critics and the general public alike. He soon became known as one of the leading figures of the New British Sculpture movement.

(The New British Sculpture movement was a movement in art that began in the late 1970s and peaked in the early 1990s. It was characterized by a return to traditional sculptural techniques and materials, as well as a renewed interest in figurative and representational art. The movement was spearheaded by a group of artists who came to be known as the Young British Artists (or YBAs). This group included Damien Hirst, Tracey Emin, and several others.)

“Everything you see is a trick of the light… light bouncing into your eye, light casting shadows, creating depth, shapes, colours. Turn off the light and it’s all gone. We use vision as a means of survival and it’s essential to take it for granted in order to function, but awareness allows us to look at looking and by extension look at ourselves and be aware of our presence. Drawing, drawing out the way that process feels and works brings the awareness into the present and into the real world, the exterior world.” – Julian Opie

Julian Opie works in many different mediums, but is perhaps best known for his sculptural and digital artwork. His portraits, landscapes, and cityscapes are all rendered in a very minimalistic style, often using only a few basic shapes and thick. black lines. This unique combination of style and techniques has won Opie widespread acclaim and made him one of the most popular, collectible contemporary artists today.

Some of Julian Opie’s most famous works include portraits of celebrities such as Kate Moss, and the cover art for the Best of Blur album that features iconic, simple portraits of all four band members. He’s also well known for his cityscape paintings, which often depict London and its citizens in a highly stylized way.

Motion has always been a fascination and focus of the artist. Julian Opie’s digital animations are wonderful, inventive and minimalistic, using only basic shapes and lines to create hypnotic walk cycles of humans or animals. Opie’s animations have been shown in various art galleries and museums around the world. The exterior installations are often large-scale and can be seen from a distance, whether in a landscape or cityscape setting. They are widely praised for their simplicity and effective storytelling.

Julian Opie – A British Pop Artist you need to know…
Opie’s art can be found in museums all over the world, and he has a large following among collectors. His work is highly sought-after and commands high prices at auction.

So, if you’re looking to add some contemporary art to your collection that’s both unique and affordable, Julian Opie is a great option. His pieces are brilliant and sure to increase in value as he continues to produce his extraordinary art. Consider collecting the work of Julian Opie today and enjoy watching your investment grow in the years to come.